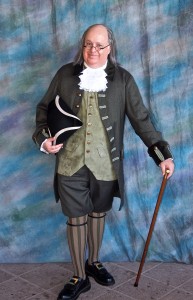 Seasoned television Actor and Comedian, Brian Patrick Mulligan, is considered to be one of the premiere Benjamin Franklin Impersonators & First Person Interpreters in the country.  He is based in Philadelphia but travels nationwide.

Brian’s fascination with everyone’s favorite Founding Father started at an early age.  In second grade, he read the book, “Ben and Me”, about Amos the mouse who claimed Franklin’s inventions.  Of course, that was a work of fiction but it spurred him on to read a children’s biography of Benjamin Franklin.

After years of study on Franklin’s life, Brian wrote the celebrated One Man Show, “Ben Franklin, America’s Inventor!” in 1990.  That show, with Brian starring in the prize role, successfully toured California for four years through the renowned Imagination Company.  Since then, Brian has written hundreds of custom “Ben” speeches and shows for Fortune 500 companies.

Mulligan is Hollywood’s “Go To” Historical Re-enactor whenever there’s an on-camera call for Dr. Benjamin Franklin!

Curiously enough, he is always asked if he appeared in the Ben Franklin episode of NBC’s “The Office”.  He did NOT….but a little known fact is Brian DID appear on “The Office” as a character actor. He portrayed “Mark” in Lecture Circuit: Part 1, Season 4, with Steve Carell.

His Corporate Performances as “Ben” have taken him from Hollywood to Washington, D.C., Philadelphia, Boston, Chicago, Atlanta, Las Vegas, Dallas, Orlando, and everywhere in between.